The Trustees of the Kennet & Avon Canal Trust are delighted to announce that they have appointed three new Vice Presidents to the Trust, namely: Bill Fisher, Terry Kemp and John Webb.

Vice Presidents are Senior Members who not only represent the Trust and its members externally, but also provide a voice for the membership in discussions with the Trustees and Executive. Additionally, they are able to take on some of the following roles:

·Acting as advocates for the Trust

·Providing a visible presence, representing the Trust at events, both
within and outside the Trust’s own activities

·Supporting the Branches in their operational roles.


To be considered for appointment, prospective Vice Presidents should meet at least one of the following conditions: they should have a high public profile, have an enhanced knowledge of the K&A, and have given long and distinguished service to the K&A.


In welcoming these new Vice Presidents, The Trust's President, David Bruce, says: “I am delighted to have such expert and well-respected Members to support me, especially in these very crucial times when the Trust has to work out its changing roles as British Waterways becomes the Canal and River Trust, which potentially will undertake some of the tasks which the K&A Canal Trust already performs. The future must lie in the two Trusts working in total harmony to the benefit of our wonderful waterway.”


In accepting his appointment, Bill Fisher comments: “I feel very privileged to be given the opportunity of becoming a Vice-President. I am delighted to accept. I became a member of the K&A Association and subsequently the K&A Trust when I left school. Consequently, I have had the good fortune to have had hands-on involvement from the canal's moribund state to the present. This has been a family affair for me; through this period I have gained one wife, two daughters, two sons-in-law and a granddaughter, and many family friends who have been an enormous support throughout this time. There is still much to be done to enhance the waterway. I look forward to working to these ends with the Trust as a trustee and a vice president. I owe much to the Kennet & Avon Canal Trust.”


Terry Kemp notes: “'Little did I know when I moved from South London to Wiltshire some 34 years ago that I would be rubbing shoulders with so many people I admired and respected. They too were (and some still are) Vice Presidents, so to be joining their ranks makes me very proud. I have always wanted to be more of a player rather than a spectator and it was because of this that I have been around at and been part of some special moments in the waterway's more recent history. I have met Royalty, collected significant tourism prizes on behalf of the waterway, almost died competing in Boto-X on the Devizes Lock Flight, and written more business plans and funding applications than I can remember. Indeed I bore my family and friends continually with stories of people and happenings on our canal. That is only possible because of the friendship and community that is the Kennet & Avon Canal Trust and its supporters. Thanks.”


John Webb comments: “I feel somewhat humble to have been offered the unexpected honour of becoming one of the Trust’s Vice Presidents, especially when I see the list of those already holding this honour and knowing what they have achieved. I am also very conscious that what I have managed to do to date has only been possible because of the wonderful band of people who collectively are in fact the Trust. Their support and friendship has been tremendous and I have learnt so much from them. I very much look forward to doing all that I can on their behalf so as to continue to help the Trust move forward, and this includes the commitment of working with the new Charitable Trust and recognising the difficult financial times which we are experiencing, so as to help fulfil its objectives for our wonderful waterway. I do hope people will not mind my using this last word rather than “canal” but the K&A Navigation does of course extend to Hanham! “


We are fortunate indeed to have the support and expertise of people such as these.

Following a dry winter and spring, there is limited water availability on the Kennet and Avon Canal. It is therefore important that we all conserve available water resources as best we can for the good of the navigation, the environment and everyone who enjoys our canal.


There are a number of steps that boat users can take; sharing locks and ensuring that paddles and gates are closed as directed being obvious ones.


In order to allow pound levels to recover overnight and not stress the waterway system unnecessarily, it will be necessary after Easter to restrict navigation in the evening and overnight. This restriction will apply to the whole of the waterway between Bath (Lock 7) and a point east of Kintbury (Copse Lock, Lock 80) . Clearly, locking the canal up every night would be a huge undertaking for the staff who work on the canal and would detract from essential maintenance and repair work. I will be requesting that users of the canal observe this restriction, irrespective of whether locks are actually chained shut. If it becomes apparent that this approach is not working, it will be necessary to shorten the navigable day further and padlock as many paddles and gates closed as possible.


As the season progresses it may be necessary to extend the extent and duration of any restrictions. The River Kennet east of Copse Lock will be monitored carefully and action taken if levels are too low to sustain navigation. Similarly, the River Avon which supplies water to the canal between Bath and the summit will continue to be monitored; continued navigation relies entirely on maintaining a water supply from the River Avon.


At present, to the east of the summit, Wilton Water (Crofton) and the associated aquifer is at a sufficient level to supply water to the east side of the canal. Imposing a restriction to navigation on this section of canal will not directly prolong the availability of this resource (ground water level will reduce naturally as the season progresses). However, forthcoming restrictions will give the canal the best opportunity to recover levels overnight and for a freshening flow to be maintained. West of the summit the overnight closures will similarly give the best opportunity for pound levels to recover and create additional capacity for feeding the summit.


Thank you in advance for actively supporting the long term sustainability of the Kennet and Avon Canal.

WATERWAY MANAGER
Posted by The Kennet Avon Canal Trust at 06:07 No comments:

Click here to read the Trust Council Minutes for February 2012
Posted by The Kennet Avon Canal Trust at 00:43 No comments:

In response to a query raised as to why BW are running water east from Wilton rather than holding onto it, our BW Waterways Manager, Mark Stephens, has commented as follows:

In essence, the underlying reason for the apparent current waste of water is the way in which the east side of the canal is fed by Wilton. Wilton is not a reservoir in the true sense of the word. The quantity of water that Wilton holds is relatively inconsequential and can only support the canal for a matter of days without being depleted. More important is the underlying aquifer that feeds Wilton. Wilton is in effect a collection point for the water that is within the ground. It should be noted that this aquifer is huge and the specific demands of the canal are relatively tiny.

Given the above, while the aquifer is able to support Wilton, there is no reason not to draw off available water to feed the canal. Following the closure of the canal that was lifted in January 2012 we have deliberately been drawing a freshening flow along the canal; while the locks have been closed the completely static body of water within the pounds isn’t ideal from an ecological perspective. The aquifer continues to fill (at least for the time being). The quantity of water that the canal consumes is negligible.

You note that Wilton is as full as it can be (or has been within memory) and I agree. You also note that we have various duties to maintain a flow in adjacent watercourses that are, at present, desperately low; the Kennet is at summer flow levels. Additionally, we are letting water off the canal upstream of Hungerford to prevent flooding our lock works on the march. I will be planning to retain more of this water further down the canal when the Hungerford works are complete later this week.


I hope that the above answers your queries; the apparent waste of water from Wilton is a valid concern and I need to make it clearer to as many people as possible as to why our management of available water doesn’t appear to make sense. I have briefed the Trade Association and will aim to spread this message further this week.
Posted by The Kennet Avon Canal Trust at 07:36 No comments:

‘Although generally a good article that made clear the current and forecast water shortages, specifically in the River Kennet, the statement implying that the Kennet and Avon canal will definitely be closed for the summer was disappointing and misleading. Every effort is being made to maintain navigable levels in the canal, including extensive leak-reduction works that are currently on-going. The west end of the canal (from Bristol to the summit pound) should prove to be more resilient to a water shortage; further pumps have been replaced this winter and works have been undertaken to allow replacement hire pumps to be deployed, off the shelf, in less than 24 hours. Clearly the canal is and always will depend on a usable base-flow in the River Avon but we are well positioned to take advantage of available water. The Kennet end of the canal will prove harder to maintain and is dependent on a groundwater supply that is at a very low level. However, with everyone around the canal appreciating the importance of conserving water, we fully intend to sustain the canal environment for the enjoyment of our visitors and to safeguard the important habitats that it supports’.
Posted by The Kennet Avon Canal Trust at 00:14 No comments:

The K&A Canal Trust, which is responsible for a wide range of activities aimed at protecting, enhancing and promoting the Canal, is seeking a partner organisation to run its well-situated canal-side cafe at Devizes Wharf. The Trust has its Headquarters in an historic ex-canal warehouse where it also operates an award-winning museum. Alongside this, its volunteers run a licensed public trip boat, and the Trust also houses the very active Devizes Canoe Club.

Having now secured a 10-year lease on this important building, the Trust wishes to extend the range and availability of the services provided by re-opening its Wharfside café through a partnership arrangement with professional caterers who will share the Trust's passion and interests in the Canal. This model is already in use in Bradford on Avon, Newbury and Aldermaston.

The Trust’s cafes are run by its operating company, K&A Canal Trust Enterprise Ltd, and further details can be obtained from the Trust Administrator, Jean Cook,
on: 01380 721279 or email: katrustadministrator@btconnect.com
Posted by The Kennet Avon Canal Trust at 00:34 No comments: 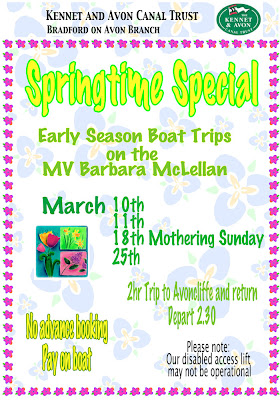 Posted by The Kennet Avon Canal Trust at 00:32 No comments:

Click here to read the Trust Council Minutes January 2012
Posted by The Kennet Avon Canal Trust at 02:26 No comments: