Several trustees were unable to make the meeting scheduled for the 3rd November and trustees convened instead via an email exchange with reports and comments being shared.  The main work in hand was setting in place arrangements for a strategic alliance with the Bruce Trust and development of the HLF bid for Crofton.  A note summarising the exchanges was agreed at the 1st December meeting of Trust Council and is available HERE
Posted by The Kennet Avon Canal Trust at 02:34 No comments:

Trust Council met on Tuesday 6th October.  Trustees reviewed the season's trading and activities which had gone well.  They also revised and updated the Commitment Register which records the Trust's commitments to future spending and is a key budget tool.

Trustees also considered a paper by trustee, David Inight, and agreed that the Trust would enter into a Strategic Alliance with the Bruce Trust.  This would see the 4 Bruce Trust boats for disabled users being run as part of our Trust fleet in 2016 and sharing back office functions.  The details of this project were announced to the volunteers of both Trusts on 21st October and will be the subject of a press release in December.

The minutes of the meeting are available HERE
Posted by The Kennet Avon Canal Trust at 11:34 No comments: 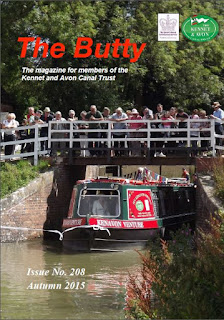 Our member's magazine, The Butty, is now available.  The magazine is available to read at on-line magazine site Issuu by clicking HERE.  If you prefer, you can DOWNLOAD a copy.

There's plenty of news of a great summer along the canal of which the highlight was celebrating 25 years of the restored Kennet & Avon.  There's more fascinating snippets from the archives and the continuing memories of Vice President, Bill Fisher.

Non members will be able to pick up a copy from our Devizes office.  All we ask is a small donation towards our printing costs.  But, if you like what you read, why not join us and receive The Butty on your doormat every Spring and Autumn.

And you'll be supporting our work to Protect, Enhance and Promote the lovely K&A.
Posted by The Kennet Avon Canal Trust at 07:33 No comments:

Trust Council met on Tuesday 8th September. Trustees reviewed income and expenditure for the first half of the year and updated the Commitment Register.  They also noted that Crofton was getting back up to speed with new staff in place and a great deal of work under way ready for a new bid to the HLF for essential repairs.

The approved minutes of the meeting are available HERE

Posted by The Kennet Avon Canal Trust at 03:16 No comments:

Trust Council met on 7 July 2015.  Trustees discussed plans for the event in August to mark the 25th Anniversary of the re-opening of the canal.  The Council also agreed to contribute £2000 towards the cost of volunteer driven work to rebuild a stone wall at Hen's Field in Bradford on Avon.

The agreed minutes of the meeting are available HERE
Please note that Trust Council did not meet in August.
Posted by The Kennet Avon Canal Trust at 08:40 No comments: 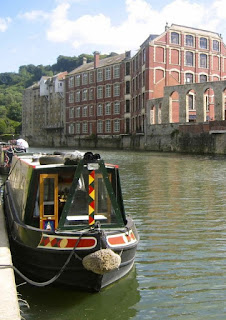 Trust Council met on Tuesday 9th June.  Trustees discussed progress by CRT on managing the issue of moorings on the western end of the K&A.  Trust Council re-affirmed the Trust's position that it speaks as an advocate for the well being of the canal as a whole and did not wish to take a view or position on mooring or continuous cruising rules.

Trustees heard a briefing by Ian Herve of Bath & Bristol Branch on moves to regenerate the River Avon corridor.  There were some ambitious ideas but little firm planning in place and some ideas were unrealistic.  Trustees agreed that they needed to be engaged in this process and invited Bath & Bristol branch to participate in the various local groups, and also to nominate a new trustee to focus on the River Avon work.

The approved minutes of the meeting are available HERE
Posted by The Kennet Avon Canal Trust at 01:37 No comments: 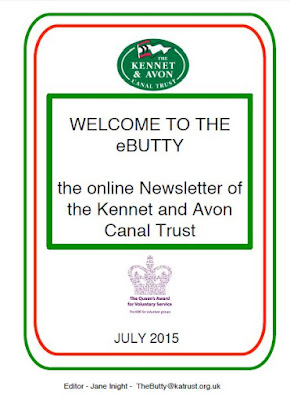 The Summer 2015 e-Butty is now available for members to read.

Enjoy the great weather!
Posted by The Kennet Avon Canal Trust at 08:28 No comments:

Trust Council Minutes for May 2015

Trust Council met on 12 May 2015.  It approved final budgets for 2015 and congratulated Treasurer Tony Nares on his dedicated work to pull these together.  Trustees also reviewed plans for the upcoming AGM and the series of events and work planned for what promised to be a busy summer season.

The minutes of the meeting are available HERE
Posted by The Kennet Avon Canal Trust at 00:57 No comments:

Trust Council met on Tuesday 14th April 2015.  Trustees discussed the budget for 2015 as well as the work taking place at Crofton to appoint new staff and manage the site with volunteers at the beginning of the season.  Trustees approved the accounts for 2014 and finalised resolutions to be put to members at the AGM in May.

Minutes of the meeting are available HERE
Posted by The Kennet Avon Canal Trust at 00:45 No comments:

Draft minutes of the Trust AGM 2014

The draft minutes of last year's AGM will be considered by members at this year's AGM on Saturday 16th May.

The draft minutes are available HERE
Posted by The Kennet Avon Canal Trust at 07:43 No comments: 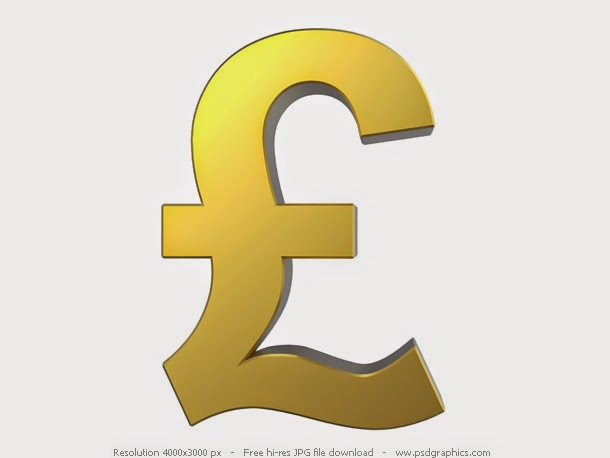 The audited accounts for the Kennet & Avon Canal Trust for 2014 are now available for members to review in advance of the AGM on 16th May.

The accounts may be accessed HERE

The Kennet & Avon Canal Trust
Notice of Annual General Meeting
The 53rd Annual General Meeting of The Kennet & Avon Canal Trust will be held at West Lavington Village Hall Sandfield, West Lavington, Devizes, Wiltshire, SN10 4HL on Saturday, 16th May 2015, commencing at 10.30 am, to conduct the following business.
Ordinary Resolutions (See note i below):
1.     To receive and adopt the Council’s Report and Accounts for the year ended 31st December 2014.
2.     To elect Members to be Trustees:
a.     Daisy Mundy and Tony Nares retire in accordance with Articles 50 and 51 of the Trust's Articles of Association. They, being eligible, offer themselves for re-election.  (Note: The above persons make up the number of annual retirees required by Article 50 of the Trust’s Articles of Association.)
b.     David Copley retires in accordance with Article 39 of the Trust’s Articles of Association.  He, being eligible, offers himself for re-election.
c.     Nominations for election to Trust Council have been received for Mr Will Job.
3.       To resolve to adopt the revised “Objects” of the Trust as published and notified to members in April 2015 as follows:
The Kennet and Avon Canal Trust seeks to:
a) promote, facilitate, and assist in the conservation, protection and improvement of the Kennet and Avon Canal and its associated watercourses, towpaths, structures and buildings;

c) protect and conserve, objects, sites and buildings of archaeological, architectural, engineering or historic interest on, in the vicinity of, or otherwise associated with the Kennet & Avon Canal;

Daisy Mundy Company Secretary
10 February 2015
Notes:
i.       A member entitled to attend and vote may appoint a proxy to attend and vote in his/her stead.  A copy of the proxy formis attached to this letter.
ii.     Notes for guidance together with nomination forms are available from the Secretary by e-mailing secretary@katrust.org.ukor in writing to The Secretary, K&A Trust, Canal Centre, Couch Lane, Devizes, SN10 1EB. Closing date for receipt of valid nominations is noon on 24th April 2015.
iii.    The Board of Trustees is currently seeking individuals specifically with skills in fundraising, marketing and volunteer management.
Registered in England and Wales: No 726331. Registered Charity: No CC209206
David Copley is one of the many canal users who enjoy waterways from the towpath and trip boats. He has explored most waterways in Britain and many in Europe. Whilst working, David was a Chartered Member of the Institute of Logistics and Transport. He has now retired from his work as a passenger transport planner, initially for a public authority and later as a consultant, but retains his interest in most aspects of travel and transport. David has been a Trust member since 1972. He joined the Reading Branch committee in 1974 and has been Branch Chairman for the past 5 years.  He is a long standing member of Trust Council and now focuses on the seemingly boring but necessary items such as drafting the Trust response to Government consultation on waterway reorganisation and revising the Trust constitution. David values the role of volunteers and was one of the members of the Newbury and Reading branches of the Trust who completely restored Bulls Lock in the 1970s. More recently he was heavily involved in volunteer assistance with operation of the Aldermaston Visitor Centre prior to transfer to franchisee operation and is now working to redevelop the Visitor Centre facilities following restoration of the buildings. He also arranges the annual waterway clean-up events in Reading.
Will Job recently moved to Horton where he is starting to renovate the cottage he has bought.  Will is keen to be an active member of the Trust and use his business experience to good effect. He has lived within a few hundred yards of the Kennet and Avon canal for a lot of his adult life, in Newbury, Reading, Hungerford and Devizes. Until a year ago, he ran a cost management consultancy, which helped companies and charities keep their overheads under control. He now owns a small property company with his partner and feels he has some spare time to volunteer.   He was president of Newbury Rotary club last year and had a very good year, raising over £20,000 through a variety of activities, including a successful Boules tournament in Newbury Market Square. As a Newbury Rotarian he helps out marshalling the crafty craft race at Newbury Lock, and each year hires a Bruce’s Trust barge for a week, to take disabled or elderly guests for a day trips on the canal. Will has a passion for history, notably steam engines and particularly the GWR, and getting out and about in the lovely Wessex countryside. Since joining the trust this year, he has volunteered at Crofton during the steaming weekend at Easter and is looking forward to doing more there and at other Trust events and locations.
Tony Nares is a Chartered Accountant who has worked in the hospitality industry for over 30 years, including public company and board responsibilities with considerable experience of relationships with stakeholders and funders. He was Finance Director of the Company of Proprietors of the Stroudwater Canal from 2008 to 2012 and has been involved on the boards of other charitable organisations. Tony has been the Trust Treasurer for the last two years.  He lives in Devizes adjacent to the canal.
Daisy Mundy is a Senior Training Consultant who retired from the Army two years ago, having completed 24 years’ service.  She has an Honours Degree in Further Education and Training, a Master of Science in Computer Based Learning and Training, and is a Fellow of the Chartered Institute for Personnel and Development.  A keen boater, Daisy and her husband, Terry, have been joint members of the Trust for the last eight years and have their own narrowboat moored in the Midlands.  Daisy was elected to Trust Council in 2011 and has since served as Company Secretary for both Trust Council and the Enterprise Board.  Terry was elected to Trust Council in 2010 and has worked as the curator of the Devizes Museum for the last six years.
Posted by The Kennet Avon Canal Trust at 11:31 No comments: