Defra has today (20 December 2010) announced that its grant to British Waterways next year will be £41.5m. This is a reduction of £9.8m (or 19%) from the 2010/11 baseline grant of £51.3m. Given that Government funding makes up approximately half of the net spend on the waterways, this will translate into an effective cut of resource available of about 12% in 2011/12.

The settlement represents the last annual grant to British Waterways in England and Wales before a longer term contract comes into place in April 2012 when the canals, rivers and docks in its care are expected to be transferred into a new charity.

Defra has also announced indicative funding from 2012/13 to 2014/15 will be an annual £39m, with a long-term commitment that a funding contract running up to at least 2022/23 will not fall below this level.

British Waterways’ chairman, Tony Hales, commented: “In the current climate it would be unrealistic to expect British Waterways to be exempt from cuts in public spending and we will have to make difficult decisions to ensure the continued maintenance of the historic canals and rivers in our care. The Government’s commitment to the first ever long-term public funding settlement for the waterways is, however, a good step forward and I have been heartened by ministers' continued commitment to this ‘Big Society’ flagship.

“Security of funding is fundamental to achieving the Government’s objective of establishing a new ‘national trust’ for the waterways. The challenge now is to develop a funding plan which gives confidence to the incoming trustees of the new charity and retains the support of waterway stakeholders. I firmly believe this can be achieved and, while we would all have hoped for a larger settlement, we are one step closer to turning the long-held vision of a waterways charity into reality.”
Posted by The Kennet Avon Canal Trust at 00:50 No comments:

As a result, the planned stoppage Period will be extended into the New Year, to allow the completed brickwork time to set and strengthen.

Every effort has been made to recover lost time; the Heathy Close and Wootton Rivers lock chambers have been filled to workable capacity with bricklayers who have worked through the weekends. The locks have been tented and heaters installed that raise the ambient temperature sufficiently to allow the use of lime mortar (lime mortar is particularly sensitive to low temperatures).

The bricklaying work will be completed before Xmas. I am however reluctant to open the canal to craft before the mortar has gained further strength. Following helpful consultation with the Kennet and Avon Trade Association I have decided that the canal will not reopen until 7th January 2011.

The start of the Dun mill lock stoppage(75), will be delayed by one week to the 17th January, to allow delayed craft time to transit through.

I apologise for any inconvenience that this decision may cause.

Seasonal greetings to all supporters of the canal.
Best Regards,

Monday 17 January 2011 - Friday 11 March 2011
UPDATE (17 December 2010): The start of Dunmill lock stoppage has been delayed by one week, to the 17th January 2011, to allow the completion of the dredging works, and transit of delayed craft from the Wootton Rivers stoppage.
British waterways apologise for any inconvenience caused.

A huge thank you to over 20 volunteers who took part in the Butty Stuffing event - the Buttys were packed in record time before 1pm. A wonderful hot lunch was also on offer on the day to keep the snow at bay. 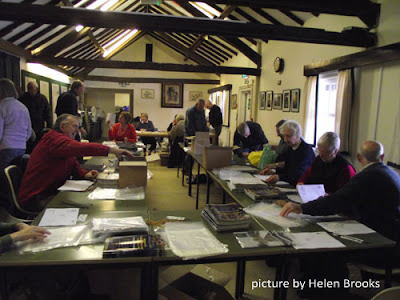 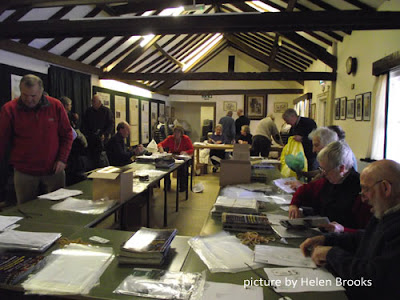 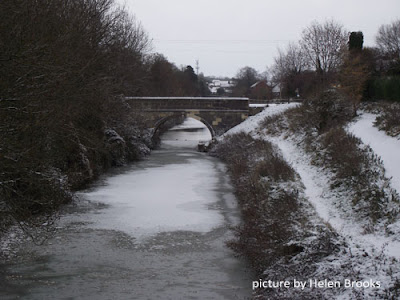 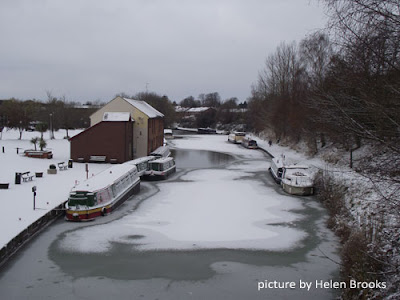 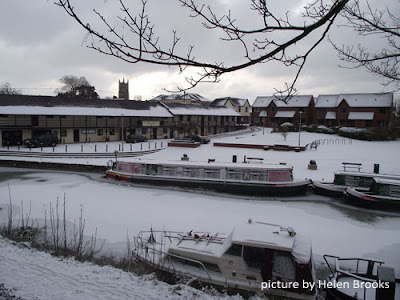 Posted by The Kennet Avon Canal Trust at 06:03 No comments: 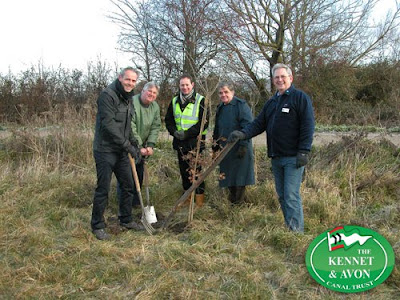 
To mark the 200th anniversary of the Kennet & Avon Canal, British Waterways have planted 29 oak trees on land alongside the historic Caen Hill Flight in Devizes.

The avenue of 29 oak trees will provide a lasting legacy for the local community and visitors alike. They will also celebrate the two hundred years worth of craftsmanship, engineering, materials and man-power which built, and has preserved, this well-loved piece of working heritage. The lock gates for the inland waterway network are still made by hand at British Waterways’ workshops in Yorkshire and the Midlands.

Still standing in another 200 years

Sarah Brice, project manager for British Waterways said: “These trees will be planted to mark the bicentenary of the canal and will, we hope, still be standing to celebrate it in another 200 years. Oak lock gates, painted black and white, are one of the most iconic features of British Waterways’ 2,000-mile national network.

"While this project celebrates the heritage of our navigations, today the Kennet & Avon Canal and other waterways are as much loved as leisure spaces and green corridors through our towns and cities as for their historic legacy. By creating this avenue of trees for, and with, the help of the local community, this bicentenary project will celebrate both the canal’s past and its future.”

British Waterways’ waterway manager for the Kennet & Avon Canal, Mark Stephens said: “Throughout this bicentenary year, projects around the Kennet & Avon have not only celebrated the navigation itself, but also the role that those who live and work on and alongside it play in maintaining the canal, and securing its future. This planting will enrich the environment around the waterway for future generations as well as marking the fascinating history of the navigation.”

article from www.waterscape.com
Posted by The Kennet Avon Canal Trust at 05:22 No comments: