Monday 7 March 2011 - Tuesday 8 March 2011
This is for the repairs to the pump pen stop valves, ground paddle frames and the grouting of the lock.

The Avon will remain open for navigation during this time but we would appreciate it if all boats could comply with the race marshalls instructions at all times and wait as necessary for short periods to enable racing crews to pass through safely. Your co-operation is much appreciated

We will have our own area for dining, but not a separate room.

To enable us to have the separate dining area, a deposit of £10 per person is required in advance.
Please send a cheque, dated 8 March, to Andy made out to 'A. James', to be received by him not later than 7th March.
Send this with a note giving your contact details and the number of persons in your group.

On the night, open a 'tab' at the bar on arrival for your food and drinks.
Then pay at the end of the meal (after deducting your £10 per person pre-paid deposit).
Payment by cash or card (no cheques).

Some of our members are not on e-mail. Please pass these details on to them if you are in touch.
Details will also be announced at the next two branch meetings.

Andy's address : Andy James, 3 Caroline Court, Bath Road, READING, RG1 6HW.
He will not be contactable between 18 Feb and 7 March.
Posted by The Kennet Avon Canal Trust at 01:00 No comments:

Friday 21 January 2011 - Sunday 30 January 2011
Reed Thatcham Angling Association, are holding a fishing match around the Kintbury Wharf area on Sunday 23rd January 2011 & Sunday 30th January, start time 9.00am till 15.00pm.
Boaters are advised to reduce their speed and be considerate to Anglers

Please find details of latest news from the Trust below

There are still tickets available for the Canal Art Workshop to be held in the Trust Offices at Devizes on the 29th January from 10am - 4pm
Relaxed course- learn to draw boats, wildlife, people and focus your observational skills. Very suitable for all abilities especially beginners.
Minimum age 16 years. Light lunch will be provided.Materials will also be provided and sponsored by HMG Paints in Andover.
All proceeds towards the K&A Trust. Tickets are available from the Trust shop in Devizes or telephone 01380 721279
See Poster below. 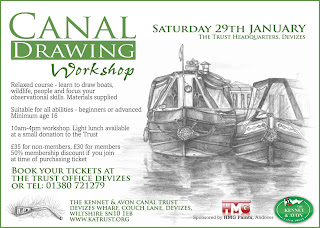 How about nominating the Kennet and Avon Trust, follow the link below for the information on how to nominate the Trust

The nominations for the 2010 John Gould Award attracted record entries. The closing date was at the year end and the Trustees of the Kennet and Avon Canal Trust were asked to place their votes to choose the worthy winner. Never an easy task!. 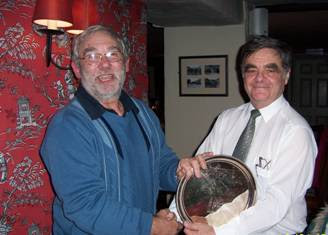 The going was close but the winner this year was Richard Snook a hard working K & A volunteer of some 13 years. Richard is a member of the Hungerford Branch committee and the boat manager for the Rose of Hungerford. Always available when something needs to be done, such as doing emergency pump outs and repairs, ensure the boat is re-fuelled, taking on additional skippering tasks, maintaining the lift, showing potential customers around the boat, and doing the huge task of preparing everything for the MCA inspections etc. He also does much to keep the Branch active and writes the regular reports for the Butty. Richard is the very heart and soul of the Rose and is always very willing to take on additional tasks for the Trust.

The award was an idea in 1997 when John Gould MBE was honoured with a plaque by his ‘second home’ Newbury Lock Island. Nobody can doubt the dedication and example John gave us all in his work for the Kennet and Avon Canal. The award is a way of honouring others who have continued working for our waterway. 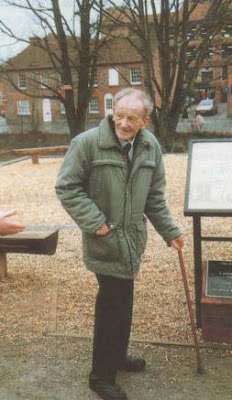 All the nominees should have been winners for all are great examples of K & A Volunteer spirit. The other nominees were – Mike Messam, Elaine Kirby, David Inight, and the Avon Vale Crew .

Worthy entrants for next year?

The Late John Gould MBE at the unveiling of his plaque in 1997 ( picture The Butty Spring 1997)
Posted by The Kennet Avon Canal Trust at 02:04 No comments:

Tuesday 18 January 2011 until further notice
Due to high water levels on the river sections of the K&A, we recommend craft do not navigate until levels subside

Friday 14 January 2011 until further notice
The Water Stand pipe at Crofton has been switch off due to contamination and will closed until further notice. The nearest water points can be found at Great Bedwyn Wharf or immediately below Wootton Rivers Road Bridge

VOLUNTEER TO MAKE A DIFFERENCE IN YOUR LOCAL ENVIRONMENT

As people make their New Year’s resolutions this January to get fit, make new friends and get out and about more, British Waterways is hoping that their new volunteering scheme on the Kennet & Avon Canal will give local residents the perfect opportunity to make a difference to their environment as well as achieving some personal goals.

British Waterways’ new volunteering scheme is looking for people to give up a few hours a month to help maintain the much-loved, 200-year-old waterway. The scheme is being set up ahead of the organisations move to become a charity in April 2012.

Mark Stephens, British Waterways’ waterway manager explained: “The Kennet & Avon Canal is a beautiful stretch of waterway, unfortunately British Waterways has limited resources to be able to keep the canal looking as good as we would like. We hope that local people will join us to help with tasks such as cutting back overgrown vegetation so the towpath is kept clear, as well as painting lock gates and clearing litter from the canal.”

Monthly working parties are being set-up at locations along the canal including: Reading, Aldermaston, Newbury, Kintbury, Crofton, Bedwyn, Devizes and Bath. Each session will run from 10am – 3pm and volunteers will be supplied with all the safety equipment needed for the towpath tasks. The working parties will be starting in February, and running throughout the year.

Karen Fishwick, British Waterways’ volunteer co-ordinator said: “There is already a brilliant volunteering spirit on the Kennet & Avon Canal, especially with organisations such as the Kennet & Avon Canal Trust. We hope that these working parties will encourage even more people to get out and about on the waterway, meet new people and find out more about their local environment. It’s quite a flexible scheme, as some people may only be able to do a few hours, whilst others might want to take part at more than one location, several times a month.”

Anyone wishing to take part in the volunteering scheme should contact Karen on 07917424590 or email karen.fishwick@britishwaterways.co.uk for further information. There’s more information about volunteering with British Waterways available at www.waterscape.com/volunteering.
Posted by The Kennet Avon Canal Trust at 05:25 No comments: