26 September 2012: This weekend (29th and 30th September) is the last chance Wiltshire residents and steam enthusiasts will have to see one of the wonders of the Industrial Revolution in action.

Crofton Pumping Station, at Great Bedwyn, near Marlborough (SN8 3DW), will open its doors to visitors for the last time until Easter 2013, for its annual Steam Gala. The site is owned and operated by the Kennet and Avon Canal Trust (KACT), which has worked tirelessly over the past 50 years to restore the canal and historic buildings along the 87-mile waterway.

In addition to seeing the station’s world-famous 1812 Bolton and Watt engine - the oldest working beam engine in the world - there will be a number of activities, including country dancing, a BBQ and real ale bar, as well as vintage tractor ploughing demonstrations in a nearby field.

During the winter, Crofton’s skilled band of volunteers will undertake a number of restoration projects at the station, one of which includes the raising of a pump’s six tonne plunger, which pulls water 40 feet up the hill to supply the canal. It’s believed to be the first time the 10-ft long plunger will have been examined in over 150 years.

Jon Willis, the station’s chairman, says: “We are very excited about this last steaming event of the year, which takes a lot of co-ordination and planning to ensure that we put on the best possible show for members of the public. After that, the volunteers will have to get down to the time-consuming job of making sure the mechanisms and machinery are in tip top condition for next year.

“We very much hope that people will come along and support the station, much of which is under cover, and so can cope with whatever the weather throws at us!”

Posted by The Kennet Avon Canal Trust at 07:50 No comments: 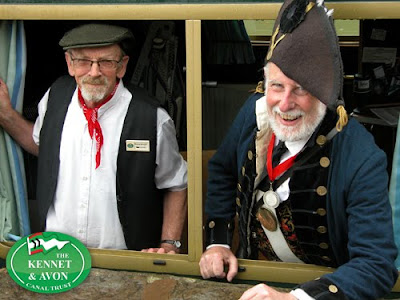 Above: (from left) Michael Messam, quartermaster for the Kennet and Avon Canal Trust’s boat Kenavon Venture and member of the Devizes branch of the KACT in traditional boatman garb, and John Binmore, part of the Devizes Regency Dancers dressed as a Royal Engineer circa 1812, aboard a canal boat on Devises Wharf on Sunday (23 September) to mark the 50th anniversary of the Kennet and Avon Canal Trust. Images courtesy of Camelot Media Ltd.


The 50th anniversary celebrations of the Kennet and Avon Canal Trust (KACT) kicked off on Sunday (23 September) with the arrival of the Mayor of Devizes and other dignitaries by boat.

Kelvin Nash also officially opened the event at Devizes Wharf which celebrated the hundreds of thousands of hours dedicated volunteers from the area have given over the years to bring the waterway back to life.

Other attractions included decorated narrowboats, historic photographs and exhibitions, as well as face painting, craft stalls, food and refreshments, including beer supplied by Devizes-based Wadworth brewery. Entertainment was provided by Devizes Town Band, and the Regency Dance Group. Visitors were also able to sample the lifestyle of narrowboating aboard the Trust’s trip boat Kenavon Venture. 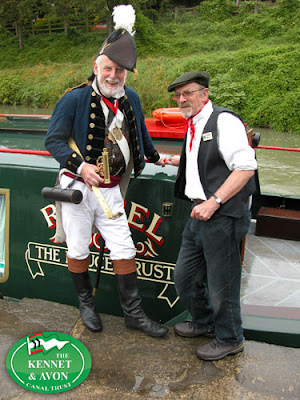 Above: (from left) John Binmore, part of the Devizes Regency Dancers dressed as a Royal Engineer circa 1812, with Michael Messam, quartermaster for the Kennet and Avon Canal Trust and member of the Devizes branch of the KACT in front of a canal boat on Devises Wharf on Sunday (23 September) to mark the 50th anniversary of the Kennet and Avon Canal Trust. Image courtesy of Camelot Media Ltd.


Funds from the day will go towards the organisation’s work in maintaining of the historic buildings and artefacts along the canal, which the Trust has been a custodian of since the organisation was formed in 1962 by a group of local residents. It will also help kick start a £1m fund-raising campaign to upgrade the historic Devizes Wharf building.

Mike Rodd, Chairman of the Council of Trustees at the Kennet and Avon Canal Trust, says: “A 50th anniversary is a great achievement for any organisation, especially for one that relies so heavily on local people to provide their time and expertise in making sure that the canal is protected for years to come.

“The volunteers of our Devizes branch have worked tirelessly for months to ensure the event went ahead as scheduled for the whole community, in spite of Sunday’s weather."

To make a donation, go to www.kennetandavontrust.co.uk and follow the instructions on the front page, call 01380 721279 or email: administrator@katrust.org.uk
Posted by The Kennet Avon Canal Trust at 07:48 No comments: 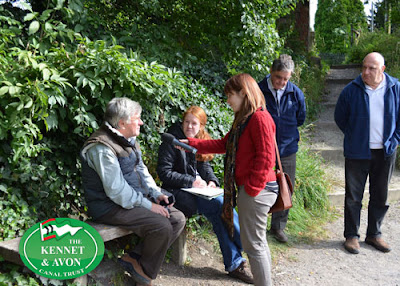 The Trust was interviewed yesterday (September 20th) by BBC Wiltshire Radio’s Marie Lennon for her Saturday show, with a prerecording on the towpath opposite the Trust’s HQ in Devizes. The interview will be aired tomorrow on Saturday 22nd September between 12 midday and 1pm, ahead of the Trust’s 50th anniversary celebration on Sunday 23rd.

Not about on Saturday? Catch up with the interview on iplayer after air here:

Don’t forget to join us on Sunday at Devizes Wharf for the K&ACT's special 50th anniversary celebration starting from 12.30pm – see the poster below for more details. 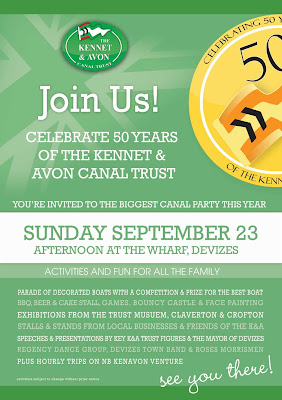 Posted by The Kennet Avon Canal Trust at 08:01 No comments:


The Diana is now on the final stage of her 5-week, 165-mile, return voyage to the Paralympics. During her time moored on the Regent’s Canal, as near to the Olympic Stadium as security would allow, The Diana has provided accommodation to dozens of disabled visitors from all over the UK who have been visiting the Paralympics.

It was a particular honour for the Bruce Trust to welcome aboard a group of men and women of the Armed Services who are going through rehabilitation at Headley Court.

For the final part of The Diana’s epic journey back to her base at Great Bedwyn, she will again be crewed by members of local Rotary Clubs who are offering day trips to groups of people with special needs.

Stated Trust founder, David Bruce: “This whole adventure to the Paralympics has been a huge success in every way. It has given my Trust a unique opportunity not only to provide day trips en route each way to local groups of disabled people but also to provide an invaluable overnight base near the Olympic Stadium for dozens of disabled visitors to the Paralympics from throughout the UK. None of this would have been possible without my Trust’s wonderful voluntary helpers and, of course, the many members of Newbury, Hungerford and Thatcham Rotary Clubs”.
Posted by The Kennet Avon Canal Trust at 06:09 No comments:

The theme is Waterways and Woodlands and will focus on the Kennet & Avon Canal, the River Thames and several small water bodies and woodlands through the area.

The event is open to anyone who wants to join to help keep Reading litter free.

More details and the events timetable can be found on the website or check out the Facebook page for the latest news.
Posted by The Kennet Avon Canal Trust at 01:11 No comments: