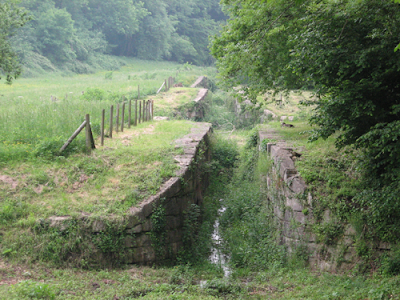 For the canal enthusiast who doesn¹t mind straying a little further than usual from the K&A towpath, a visit to Combe Hay Locks on the Somersetshire Coal Canal will prove to be a rewarding experience.

A few years ago the remains of the lock flight was all-but invisible, following 100 years of dereliction; so, whilst the K&A was marching forwards towards full restoration, the S.C.C. lay abandoned and unwanted. It had become a ten-mile long by 20 ft wide jungle. Even the formation of the Somersetshire Coal Canal Society did little to alter this at first, because the Society was dedicated to research and preservation. Any thoughts of restoration were firmly put aside in deference to the local landowners, who valued their privacy.

Now all that has changed: the landowners and the S.C.C.S. are pushing forwards eagerly to clear the canal of vegetation, restore its amenity value and, eventually, who knows, to open it for navigation at some time in the distant future. Several locks of the Combe Hay flight have been cleared and, although lacking gates and paddle gear, they now form the centre-piece of an embryonic restoration project.

Part of the lock flight is on a public footpath and can be visited at any time, but later this year the S.C.C.S. will be participating in ³Heritage Open Days² and will be organising a weekend of guided tours. This is an opportunity to learn all about the Bull¹s Nose, the pumping engine with its hidden tunnel and the many other features of the S.C.C. that make it a rather special canal in so many ways.

The guided walks will start hourly from an exhibition site underneath the railway arch opposite Bridge Farm on the Midford road from Combe Hay (ST 746604) during the weekend of 10th - 11th September 2011.

Adrian Tuddenham
Posted by The Kennet Avon Canal Trust at 00:38